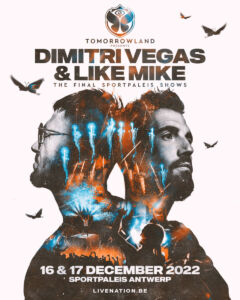 December 16 and 17 will be the annual Dimitri Vegas & Like Mike show in Belgium!

Every December since 2013, Dimitri Vegas & Like Mike have held a three-hour Bringing The Madness show, which in 2018 was replaced by Garden Of Madness: they created a new stage for it in the form of a large garden and changed the format of the shows. It was now an uninterrupted two-hour set, for which the usual b2b performances were removed, as well as the old-school set part.

According to the announcement title “Dimitri Vegas & Like Mike The Final Sportpaleis Shows” this will be their last Madness show, after which they will cancel it or just replace it with something else with a different date and venue.

During the whole existence of the show, a lot of new tracks were played, the release of which we are still waiting for, and many popular artists were invited: Steve Angello, Armin Van Buuren, W&W, Steve Aoki, Afrojack, Lost Frequencies, Regi and, of course, Hardwell.

We can’t wait to be smashing Antwerp one more time again! Join our madness. Tickets are available via Dimitri Vegas & Like Mike The Final Sportpaleis Shows